Skip to content
Forward: I write fantasy because of Masters of the Universe. In 1981, when I spotted the He-Man action figure in the toy store, my life changed forever. I adored the detail of the sculpt, a rarity in those days, but it was the mini-comic the toy came with that sealed my love for all things fantasy. In its 22 pages, I discovered a world of magic, monsters and heroes, and I never wanted to leave that world. That comic was The King of Castle Grayskull. Being six, I could never imagine the plethora of literary heroes that had formed the basis for He-Man, from Edgar Rice Burroughs’ John Carter to Robert Howard’s Conan, and it has been a personal goal of mine to trace those roots over the past twenty years. My own barbarian hero, Xandr, owes a great deal to He-Man. They are both blond and blue-eyed and they both possess a sense of duty and honor. Looking back at The King of Castle Grayskull, I am surprised at how well the artwork holds up. It is a testament to the artist (who, I now know, was largely influenced by my all time favorite, Frank Frazetta). In later years, the artwork suffered terribly; and all I can say is, it’s a good thing whoever was in charge of Mattel in 1981 valued fantasy art, or I might not be the person I am today. The quality of the early minis drops only in the writing. I am well aware that much of the story was a marketing ploy, and that it also had to be simple enough for a six year old to read. With so many restrictions, I cannot fault the original author for poor storytelling.

Partly due to nostalgia, partly due to the fact that I feel the book deserves a better edit, but mostly for the heck of it, I thought to try my hand at The King of Castle Grayskull, in my first ever comic book story. To read the story, click on the images below.

One thought on “The King of Castle Grayskull” 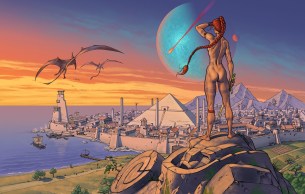