Face it, it’s not easy being different, especially if you’re one-out-of-a-million different. I’ve known this feeling all my life, because I was never like “the other kids.” I was born to Greek immigrants who were too busy making pizza to raise their son. Bored and lonely, I talked to myself constantly. I didn’t just have an imaginary friend, I had an imaginary universe! I also collected toys and watched cartoons well into adulthood. I remember a time, strange as it may be, when even playing video games was considered taboo for people over a certain age. But while society has become more tolerant when it comes to hobbies and sexual orientation, there is still a part of me I continue to hide from the public eye. Living in the sweltering Florida heat, clothing for me is a waste of money and laundry detergent, but even in winter, I prefer to live naked whenever possible, and I know I am not completely alone in this regard. We’re called nudists! And I am proud to count myself among them. But of the tens of thousands of card carrying nudists in this country, I might as well be the only one. My contact with free body individuals like myself is limited to social media, and despite knowing we’re out there, everyday face-to-face relationships can be fraught with anxiety and isolation. Just like the LGBT community, we fear what other people will say about us, that we will be called perverts or made the butt of jokes, or worse, that we’ll be socially ostracized. We fret over losing jobs, friends, and even our relationships. Despite an abundance of naturist blogs, almost none of the bloggers I know use their real names, or dare to post nude selfies. Keeping secrets can be emotionally taxing, however, especially if those secrets are kept from the people closest to you. You play the same scenario over and over in you head. If they find out, what will I say? What if they already know and are too embarrassed to bring it up? Sometimes it’s infuriating, like when a fellow coworker said to me, “Those people can do what they want, but leave the kids out of it!” You want to defend yourself, to cry out, “Hey, we’re not perverts! When we see a naked child, we see a child, but you see something obscene. So who’s the sicko here, bud?” Of course, you keep your mouth shut, because god forbid someone mistakes you for a pedophile. Another time, a friend showed me a pic on his phone of The World Naked Bike Ride, remarking, “What a bunch of perverts!” I don’t know what he was thinking, but I was imagining how nice the sunshine and the breeze would feel pedaling along the Thames.

The worst case scenario, of course, involves the in-laws, and mine just happen to be Muslim. I can’t begin to imagine how they’d react, discovering their son-in-law is a nudist, but hell, at least I don’t blame revealing clothing for rape. Lastly, there are the kids to consider. My wife suggested that we let them make their own decisions, but as I pointed out to her a decade ago, shame is a learned habit. We have never taught our children shame, so they are inevitably coming around to the same pro-naturist conclusions I have. Still, you worry. I’d hate for them to grow up with feelings of anxiety and isolation. What a terrible thing to pass on!

But what if, and this is a BIG if, the world could be different? Imagine your kids coming home from school, flipping to Nickelodeon, and seeing a cartoon with this character in it?

If you find this offensive, ask yourself this simple question: what message does this image teach our children that would be harmful to them? That it’s OK to not be ashamed of their bodies? Or that nudity doesn’t have to lead to anything sexual? Now if you’ve been taught, as most Americans have, to equate any and all nudity with sex, this might be problematic for you. But the reality is this: children will be exposed to nudity, whether you want it or not. They’ll see it in the mirror, or at a friend’s house, or eventually, on their cell phones. Even if they never chance to see the human body accidentally, what happens when they become curious enough to want to learn more about themselves? Try typing “naked” into Google and ask yourself if you would be comfortable with your kids seeing what results pop up. The question then isn’t whether kids will be exposed to nudity, but how and in what form.

There was a time when a black man dating a white woman elicited moral outrage, and called for the protection of our children. But throughout the sixties and seventies, black characters in comics, TV, and in movies helped change this attitude. Even in the eighties, shows like Diff’rent Strokes, What’s Happening!! and Good Times, with its all black and integrated cast, did a great deal to color my views (sorry, pun) regarding race and inequality. Martin Luther King Jr. was no doubt the greatest catalyst for change, but contributions from actors like Academy Award winner Sidney Poitier should not be forgotten. When Nichelle Nichols, who played Uhura on Star Trek, had thoughts of quitting the show, it was King who convinced her to stay, emphasizing the importance of seeing black characters in the media. Later, Uhura and Kirk shared the first interracial kiss ever broadcast on TV, which must have stood out as a victory for interracial couples. More recently, films like In and Out and Brokeback Mountain, as well as shows like Will and Grace and Ellen, have helped normalize perceptions of the LGBT community in the public eye.

Without these works of fiction, to inspire those who are different, and to shed a compassionate light on those who are not, these social movements would never have gone anywhere.

To be fair, I do not mean to equate textilism to racism, or to any other form of discrimination. Far from race and sexual orientation, nudism is a choice. But at the same time, it is as much a part of my identity as being Christian, Democrat, or Conservative. Many people opposed to homosexuality make the argument that “being gay isn’t a race, therefore it’s nothing like racism.” But our society has since expanded its definition of identity to include sexual orientation, and it was a hard won battle. The same considerations should be applied to how we choose to live our lives, and there is no way to get there without positive examples, without heroes to paint us in a sympathetic light. Nudists must do more than fight for a spot on the beach or have body painting exhibits. We must express who we are and what we believe in all forms of media, to show the world we are rational, decent, and no more deviant than any other group. Besides, nudism can help bring people together, because when we are naked, we see that as human beings our commonalities outweigh our differences.

What Star Trek did for race, a Star Wars-like series could do for nudism. Imagine a Jedi from a planet where body shame doesn’t exist? Or a Teenage Mutant Ninja Turtle-style show with kick-butt heroines who aren’t afraid to show their butts? 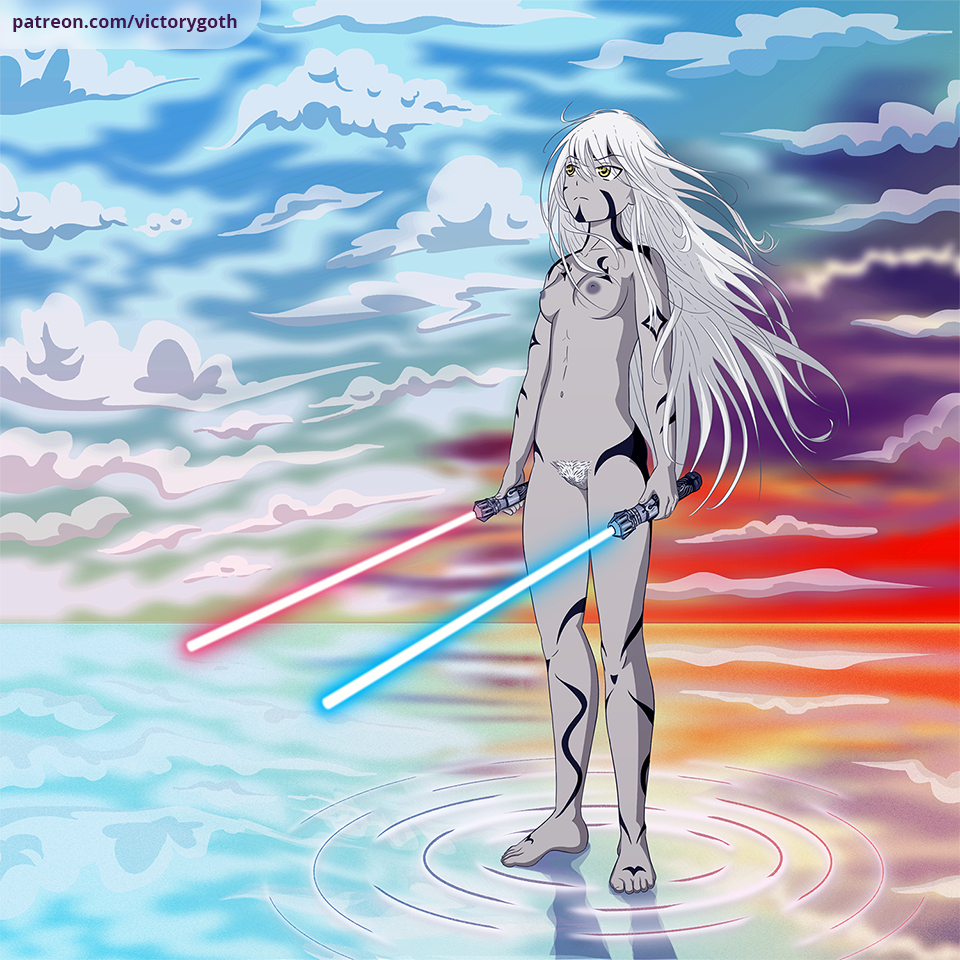 My book, Ages of Aenya, features true naturist heroes in Xandr and Thelana, and they are quite unique to the fantasy genre. Edgar Rice Burroughs’ John Carter of Mars, first published in 1917, features a nude hero and heroine, but the nudity in those books is hardly naturist. You never meet Carter’s mother, and if you did, she’d likely be wearing a corset and bonnet. Even Tarzan learns the value of proper attire after meeting “civilized” people.

Before being ousted from his homeland at fourteen years of age, Xandr never saw clothing of any kind. His mentor lived naked, as did he, as did Thelana’s parents and siblings. The nudity was innocent and free and beautiful. When, eventually, they meet textiles from the outside world, they do not learn modesty, only the hypocrisy of a world much like our own, where war is waged under the guise of religion, the homeless are shamed, and the naked are called primitives, even while prostitution and rape run rampant in the alleyways.

I am not saying Xandr and Thelana can change the world. They most certainly can’t. But this type of fiction is a necessary step. Young people growing into nudism will have heroes they can more closely identify with, while everyday readers, who never think twice about nudity, may begin to question their assumptions. The sooner we embrace innocent nudity, the sooner we erase the centuries-old taboos associated with the human body, and learn to see our bodies in a more healthy, normal, natural way. 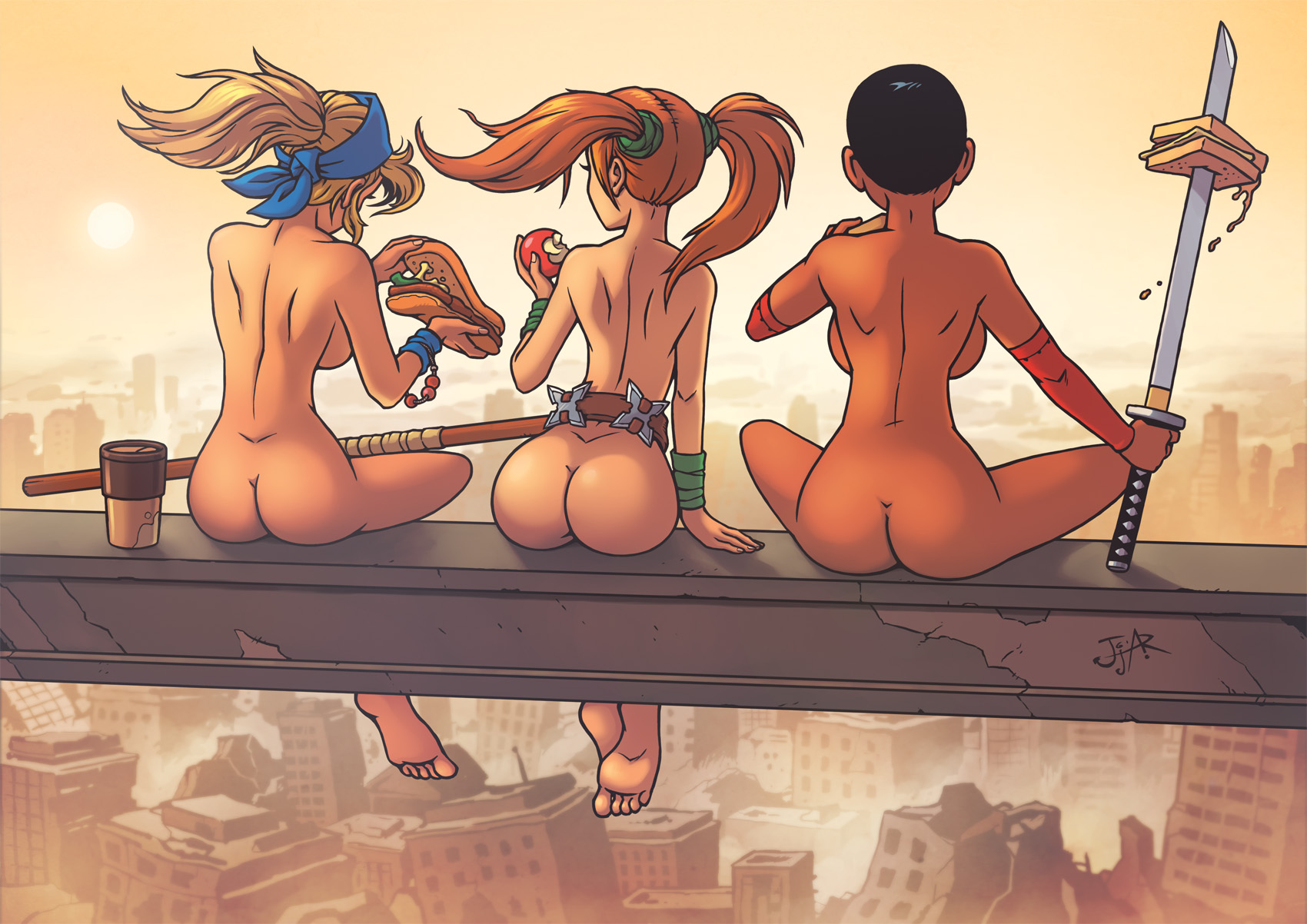 Please be sure to check these awesome, pro-nudist art galleries at Glitchy Real, JayNaylor and JjAR01

One thought on “Why Nudists Need Heroes”