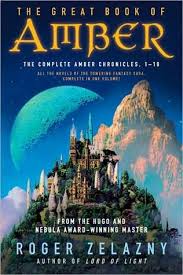 I first heard of Roger Zelazny in the September 2004 edition of H&E Naturist magazine, in a review of my book. In it, Tim Forcer writes,

Sword and sorcery is a very old tradition of story-telling – possibly the oldest. Alimonos is not afraid to acknowledge one of the earliest in this tradition, that ancient Greek, Homer. He also quotes from or nods to a wide range of SF and fantasy authors, from Adams to Zelazny. But this is no derivative imitation or poor copy; Alimonos delivers a tale which is well-constructed and moves along at a fair pace.

By Adams, I assumed he meant Douglas Adams of The Hitchhiker’s Guide to the Galaxy, but who in the world was Zelazny? I didn’t worry about it much at the time because I understood Tim to mean that my book alluded to every author from A to Z, obviously. Later on, I found Zelazny listed on many on-line forums as a must-read author, but the only thing I could find at my local bookstore was The Great Book of Amber, a tiring to hold 1258 page tome (no Kindle version yet!) collecting all ten of his novellas, which take place in the world of Amber. Interestingly enough, The Great Book of Amber is my 100th novel, and this review is my 100th post! How’s that for coincidence?

PROS: The concept is what makes the book worth reading. As Zelazny describes it, Amber is the one true world, and every other world is a shadow. You can think of these shadows like multiple dimensions or alternate universes. Characters move between them like in the TV show Sliders. The difference is, Amber is the only real world, whatever that means, so what happens in Amber affects every other universe—these include a modern day Earth and an Avalon from the Arthurian myths. Aside from that, the story is fairly simple and straightforward. Much of the conflict revolves around the Nine Princes, who, much like the families of the Roman emperors, continuously battle over who will rule in Amber.

As for Zelazny’s style, it is yet another great example of the myriad ways in which a story can be written, about which I am continually fascinated. In keeping with the theme of multiple universes, many of which include modern and medieval settings, Zelazny switches between a more descriptive style evocative of older fantasists and a simpler style emphasizing modern slang. Here are some examples:

Staring downward through the smoke, I caught my first glimpse of that sea. Beneath the deep blue, almost nighttime sky, with that golden sun hanging up there in it, the sea was so rich—thick as paint, textured like a piece of cloth, of royal blue, almost purple—and it troubled me to look upon it.

Ditto. and You get the idea.

CONS: The problem I had with the Great Book of Amber is that it revolves entirely around one character, Corwin, and he isn’t a particularly nice person. In his near obsessive quest to steal the throne from his brother, Eric, he comes off as self-centered, deceitful, and ruthless. Some readers think morally ambiguous protagonists are fresh and modern, but for me, a jerk is a jerk in any time period, in any universe. I suppose you can’t entirely blame Corwin’s behavior when his family members act just as badly. Two-hundred pages in, and I still don’t know why I should care about Corwin, or whether he even deserves to be king. Is his brother a terrible ruler? Would Corwin be any better? Zelazny never lets us know. If you ask me, the people of Amber should elect Trent as their king (from Piers Anthony’s Xanth). Maybe I could have cared more if the story didn’t revolve around one egocentric bastard. What’s worse, I never got a sense of Amber; from what we’re given, the one true world consists of a nondescript palace surrounded by a beautiful forest and a lake. Again, I’d rather spend my frequent flier miles on Xanth.

Overall, the story is simple and the characters are unlikable, but Zelazny is an imaginative powerhouse, continually inventing new ways to surprise. As long as you can stomach the insufferable ruling family (though honestly, I’m thinking a Bolshevik style revolution is in order), Amber may be worth the trip.