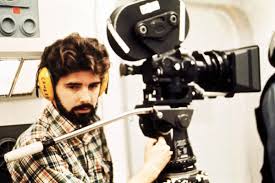 After more than a decade of defending him, I am finally brokenhearted by George Lucas. Why, George, why? See, I have always regarded him my favorite director. And not just for Star Wars. I love THX-1138 and American Graffiti just as well. Despite the torrent of hatred lobbed at him from YouTube and message boards, I have always admired his tenacity, his unwillingness to conform to the strictures of the masses. When Star Wars was made, Lucas defied tradition by refusing to put the credits at the beginning of the film. Because of this, he was kicked out of the Director’s Guild. When he was preparing to make The Empire Strikes Back, Lucas was afraid of studio intervention, so he financed the movie himself. If he hadn’t, there is not a doubt in my mind 20th Century Fox would have made a passable sequel at best, adding nothing to the franchise. Throughout his career, Lucas stuck to his guns, despite the critics, because that’s what artists do. When the Prequel films went on to receive near universal disdain, I applauded his courage, in challenging moviegoers to think, for producing, from his own pocket, a pop culture Sci-Fi adventure dealing with such heady topics as the root causes of evil, the Buddhist tenets of non-attachment, and the collapse of democracies into dictatorships. What other Sci-Fi films, aside from Stanley Kubrick’s 2001: Space Odyssey and Ridley Scott’s Blade Runner, even comes close to such laudable artistic ambitions? Sure, the Prequel films weren’t your regular direct-by-numbers, mindless entertainment, but at least Mr. Lucas offered us something to discuss. Whether or not you agreed with Jar-Jar or thought the acting was abysmal is besides the point. Art isn’t intended to appease the majority. There are enough watch-it-and-forget-it movies out there. I wanted a Lucas film more than any other film, because he was unique; he was an independent billionaire who didn’t play by Hollywood’s rules. I don’t want to be spoon fed what a studio thinks I want to see. Hell, I don’t even want to be pleasantly satisfied. I want to be challenged. To be disturbed. Even annoyed. I’ll take Jar-Jar’s annoying antics over cut-and-paste film making any day. So when the masses cried foul that Han no longer shot first, Lucas stuck to his guns. He didn’t relent. Any other studio would have. Whether I agreed with him or not (I often don’t) I have always been inspired by him.

Walt Disney (the man, not the company) is another hero of mine. When he was working on Snow White in 1937, everyone told him the same thing they told Lucas; the movie would bomb and he’d lose all his money from mortgaging his house. But Mr. Disney stuck to his guns. He didn’t make Snow White merely as a financial venture, but also for artistic reasons. Then Walter kicked the bucket, and the studio went on to make a number of atrocities until, by 1988, they were prepared to shut down their animation department. What saved Disney animation and the future of the entire medium? The Little Mermaid. But, the movie almost didn’t get made. The artists, however, were given free reign, having been moved into a trailer park and largely forgotten. Fortunately, Disney went on to make a number of masterpieces, from Beauty & the Beast to Mulan, before succumbing to the industrial machine with garbage like Treasure Planet. Watch either the Toy Story or the Pocahontas documentaries to get an idea of how Disney films are produced today. In Pocahontas, the wonderful song, If I Never Knew You, which spoke to the heart of the story and which validated the not-so-happy ending, was removed. Why? During a pre-screening, some kids looked bored. If Pixar hadn’t made the decision to ignore Disney’s advice about making Toy Story edgy (because that’s what kids “want,” apparently) we wouldn’t have the lovable Woody and Buzz. Fortunately, the head of Pixar understood the value of art for art’s sake. John Lasseter had been a long time fan of Studio Ghibli, the Japanese animation company headed by visionary Hayao Miyazaki, responsible for such masterworks as Spirited Away and Kiki’s Delivery Service. Given this background, it’s no wonder Lasseter refused to kowtow to Disney’s demand for a Toy Story 3. Pixar made the wonderful Finding Nemo instead.

The Disney Corporation is an entirely different beast than Disney the man, buying Mighty Morphin’ Power Rangers (because it wasn’t enough that every little girl on the planet adores Disney); Pixar (since they couldn’t force them to make a Toy Story 3 otherwise); and Marvel Comics. At least John Lasseter became the new head of Animation, who had the good sense to bring back traditional 2-D (presumed dead by a board of directors, no doubt) with The Princess and the Frog. Marvel has always had financial difficulties since, let’s face it, kids are too busy playing video games to spend 3 minutes reading, so maybe a Disney buyout was necessary. But Lucasfilm? Industrial Light & Magic is the premiere special effects company in the business. And their merchandise, which includes toys, games and books, sell like hot cakes. Best of all, it was all being run by a visionary, an anti-corporate tycoon, a man who produced Tucker, the true story of a revolutionary car maker bought out by the auto industry. It already frightens me how, when I submit my book to editors, most of the major players, despite going by many different names, fall under the same publisher. The fact that a handful of billionaires will eventually control everything we read and watch and listen to is terrifying, the very socialist, sterile future Lucas warned us about in his first film! So what does George Lucas go and do to finally, finally break my heart? My hero of independent thinking? He sells. And not just to anybody, but to the biggest of corporate conglomerates, to an industry that prides itself on focus groups and catering to expectations, where art has been broken down into a science, and success is measured only by the almighty $$$.

What can we expect from a Disney owned Lucasfilm? New Star Wars films, made by teams of writers, each scene optimized for marketing potential and toy-tie ins; and of course, any and all outrageous ideas, things that might upset or offend people, will get voted down. And what will we have? Films nobody complains about. Films nobody will go on message boards to rage against. No more boycotts. They’ll be like Tron and Pirates and Narnia. Moviegoers will be happy, Disney will make billions, and Star Wars will become just another blip in the noise machine that has become our modern movie producing society.

I honestly feel sorry for Lucas. The Internet age didn’t agree with him, and the haters finally beat him down. We live in a world where people with no real talents are given an equal platform to voice their discontent, where lynch mob mentality dominates, where opinion is indistinguishable from fact. I am deeply saddened by this news on so many levels. Art is dead and the Internet seems to have killed it. To further illustrate the point, last week, the Wachowskis (of Matrix fame) released Cloud Atlas, based on a truly revolutionary book with deep philosophical underpinnings. Making ten million dollars in its first week, it is already being called the biggest flop of 2012. Based on those returns, we can expect the Wachowskis to get booted out of Hollywood soon, along with Shyamalan and Lucas, and anyone else who dares challenge the feel-good status-quo.