A while back, I wrote a post regarding my preference for tabletop role playing games to video games, and the ten reasons I feel D&D is the real deal. Today, I’d like to address the flaws I find in electronic RPGs like Dragon Age and Skyrim. Don’t get me wrong. I’ve loved video games since the NES days. But when I switch from the real thing, with dice and paper, to a console, the effect can be jarring. The most noticeable thing I find is that, with an electronic RPG (let’s call them VRPGs) there is no sense of realism. Now it might be unfair to compare D&D to Diablo, which is little more than a mindless hack n’ slash, so let’s look at the cream of the crop, a game IGN gave a 9.3: The Witcher 3: Wild Hunt.

What I find particularly perplexing about most VRPG’s is the canyon-wide dichotomy between the visuals (and audio) and basic logic. The Witcher is breathtaking in its detail, from the varied plant species to villagers going about their daily chores. Such sights and sounds are difficult, if not impossible, to convey in a dice and paper game. Stirring music and voice acting further enhance the immersive feel, and the end result gives the player the sense of really being there. Tabletop or digital, immersion is a sign of a great RPG, when you feel transported to another reality. So it boggles the mind to see how little attention is given to logic. The contrast is so stark as to pull me out of the experience every time. It screams artificiality. What does it matter that you can count the leaves on every tree, when a pack of wolves runs right past a peasant doing laundry and she doesn’t even notice?

My character, Geralt, is a legendary warrior with a storied past, a monster slayer for hire, a witcher. Villagers and soldiers alike speak to me with reverence and a measure of trepidation. Surely, I am a bad ass, right? Wrong! The first wolf I came across killed me, and it wasn’t even a close fight. I was eviscerated. By a lone wolf. Now, I’ve played enough of these RPGs to understand how they work. I am certain that by the end of the game, I’ll just look at a wolf and it’ll explode in a shower of blood and fur. But here’s the thing: this is not the story the game is telling me. If I had started off as a peasant farmer learning the ropes of swordsmanship, a solitary wolf might be a credible threat, but Geralt the Witcher, bane of monsters everywhere? The same thing happened to me when a random guard caught me looting. He killed me in two hits. TWO!!! This, despite my whacking him for about five minutes, with a two-handed sword no less. If this had been anything like real life, he’d have been on the ground bleeding and bruised, with deep gashes and broken bones. Sure, we have hit points in D&D, but I never imagine my hero just standing there like some invincible deity, taking hit after hit. Now I realize games aren’t meant to simulate life. Nobody wants to role play sleeping 6-8 hours a day, suffering the occasional bout of dysentery, doing menial tasks to pay taxes, having to quit adventuring over a herniated disc, and finally dying of the flu. But the goal of any RPG is to approximate reality enough to suspend disbelief. With my PS4 controller in hand, however, I am constantly being beaten over the head with the fact that THIS IS A GAME! You must level up before you can fight a wolf, never mind what the story says!

Now, after stabbing this damn wolf about a hundred times, my sword breaks. I find this odd. Historically speaking, weapons of iron and bronze broke much more frequently than games and movies let on, but this had less to do with usage and more to do with physics. Whack your gladius hot off the forge against a rock and it’ll shatter. Smack it against a soft furry pelt and you can pass it on to your grandsons. OK. So my sword is broken. This is a serious problem, my being a witcher and all, so how do I fix it? Does anyone in town know a good blacksmith? Well, if this were medieval life, or D&D, I could ask someone. Later in the game, I meet General So-and-So, who needs me to take care of a griffon that is eating his men. But here’s the thing: his men are far more powerful than I am! Which brings to mind Elder Scrolls: Oblivion. The guards in that game kept chasing me through hell—literally hell—over an apple. One, lousy, apple. Tamriel is being overrun by demonic forces, and all anyone cares about is shoplifting, random guards who could, for some reason, kill the entire fighter’s guild. This was a story-breaking design flaw for me, turning Oblivion into the tale of the poor thief (me) fighting to feed himself.

So General So-and-So asks me if I need anything to kill this griffon. Yes, I need my damn sword fixed! But I am forced to watch an irrelevant cut scene instead. And here’s another problem I have. Scripted events. You do as the game dictates, not as you want. When it comes to consoles, I sometimes wonder whether I am actually playing the game or if the game is playing me. More often than not, any sense of control or decision making is illusory. Sure, I can choose which way I run up the hill, but I still need to get up that damned hill. Dragon Age 3 was the worst in this regard. Like playing a train simulator, you’re just stuck on the tracks, going along for the ride. Even in The Witcher, I have no sense of embodying my character. In D&D, I could truly be Geralt, or come as close to it as possible without a holodeck. I could, for instance, decide not to look for Yennefer, get hitched to the barmaid instead. And why the hell am I collecting plants? I am sure they’ll come in handy somehow, otherwise the game wouldn’t let me collect them, and yet this further breaks the illusion of reality. I do things simply because the game lets me do them, which clues me in to the fact that I should be doing them, whether it makes sense or not. Now imagine walking out of your house and grabbing every random thing in sight: sticks, small lilies, dollar weeds, the neighbor’s mail . . . Am I a hero or a hoarding kleptomaniac?

Video RPG’s like Skyrim, Dragon Age and Witcher are my surrogates for the real thing, been playing them since the mid-80’s. Games like Dungeon Master, Eye of the Beholder and Black Crypt for the Commodore Amiga. It’s often a poor substitute, and yet there’s no one who will drop my house at 2:00 in the morning to roll dice, and most of my friends and family think me deluded for preferring pen and paper over billion-pixel graphics. So . . . it’s back to the Witcher for me and, fuck, I just walked off a bridge and died. Time to reload.

OK, so I’ve put over 100 hours of play into The Witcher 3: Wild Hunt, and think I know enough about the game to make a fair assessment, and my original impression stands. While The Witcher 3 serves up an impressive feast for the eyes, it pales in comparison to the genuine sense of adventure you get from a traditional role playing game like Dungeons & Dragons.

Again, the standout feature in The Witcher 3 are the jaw-dropping visuals. Even after a hundred hours, I can’t help but want to stare at it. It’s hard to believe that a team of programmers added that much detail, from a stray cat prowling the streets to kids playing in a field of sunflowers, to a family of geese crossing a dirt path or an old lady sweeping her front porch. But for all its vast beauty, there simply isn’t much to do. As a player, you feel stripped of options, a passive onlooker. Gameplay boils down to two things:  1) Kill something  2) Buy something. Sure, there’s an epic story to explore, but it’s a convoluted mess, like a hundred different authors got together to write one book, with hardly any agreement between them, so what happens in one chapter becomes meaningless in another. For example, I helped elven master smith, Hatori (from Kill Bill, apparently) in exchange for a sword of unparalleled quality. Turns out, when he presented me with this weapon of ultimate craftsmanship, I owned a dozen better swords already. And this leads me to the problem of realism, because while the creators of the game felt it necessary to showcase a hundred different flowers, they failed to make the mechanics of play echo that same realism. Why is it that I still, even at level 36, cannot use a god damn sword made by the village blacksmith? What magic prevents me from just picking it up and swinging it? If the developers didn’t want me having a weapon that deals 500 damage, they should not have put it in the game, or have those weapons sold all over town. It makes me wonder, if the guy who saves the world can’t put on a pair of gloves, who the hell can? Who’s buying all these god level-items? And don’t get me started on the random guards, who are far more powerful than the demonic elf gods invading the world!

None of this would be such a problem if at least I had some agency, some sense that I am making decisions for my character. Geralt is in love with Yennefer, not Triss. If this were Dungeons & Dragons, I would’ve dumped that bitchy sorceress for the sexy red-head without a thought. The Witcher forces you to do things, and in a very confined, particular way. We call this railroading in D&D, and it’s the mark of bad DMing. Last night, I nearly fell asleep playing, I was so bored.

So why play at all, you may ask? Mainly, it gives me something to do, and it’s still more engaging than watching TV. And that really seems to be what the Witcher is, not a game per se, but an interactive show.

Now if you enjoyed the Witcher and you really want to take control of Geralt’s story, here he is in D&D form: 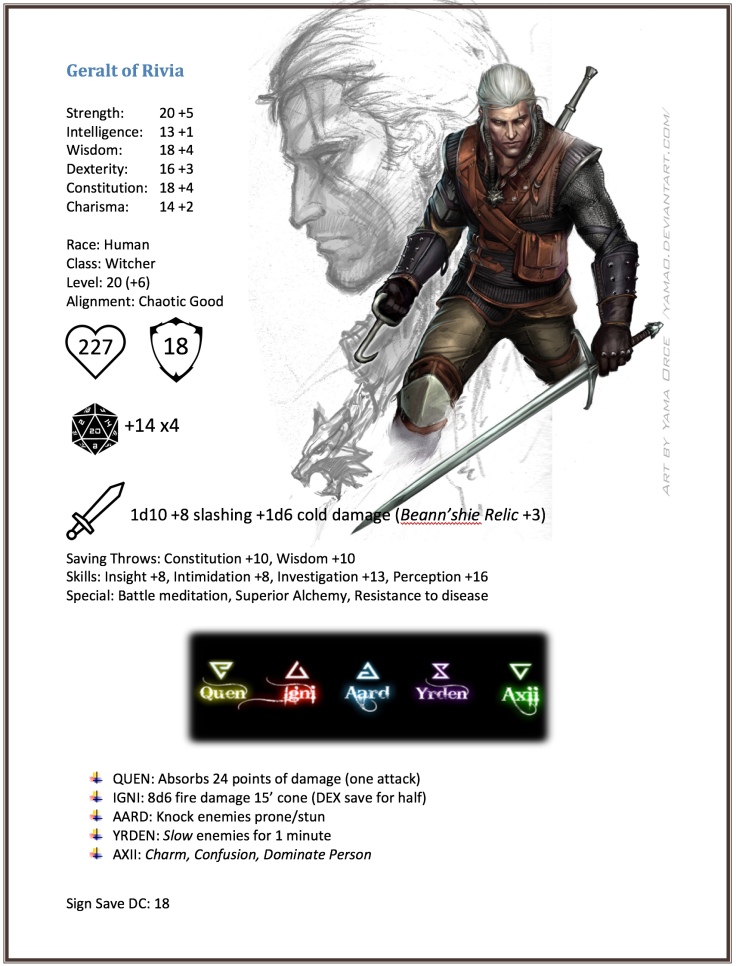 For a Dungeon Master, these games are inspiration, so I also made rules for playing as a Witcher in D&D (you’ll need this to play Geralt!), in this easy to reference PDF. Enjoy! 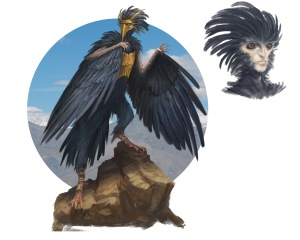 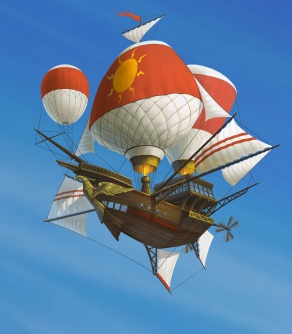