It’s the end of the world as we know it … and I feel fine.

I have a lot of experience writing about apocalyptic events. You could almost say it’s my forte. In Ages of Aenya, when the sun expands from a yellow star to a red supergiant, 90% of all Aenya species perish. Millenniums later, Hedonia is wiped off the map by a tsunami and a horde of merquid. Xandr’s and Thelana’s home of Ilmarinen is also abandoned, their crops having withered following a drought. Things aren’t all rainbows and sunshine in The Princess of Aenya either. Tyrnael, capital city of the long extinct Zo Empire, falls into the hands of a sadistic tyrant, Zaibos. Torture, death, and a perpetual state of paranoia ensues.

Why fiction (and the romantic tradition) matters, especially now

I don’t actually enjoy thinking about worst case scenarios, but I gravitate toward the subject, because in times of great crisis humanity comes into focus and we discover the very best and worst of our natures. Heroes are born during cataclysm, as are villains. But there’s more to it than that.

Now, I won’t pretend that my recent book has anything to do with the coronavirus. It doesn’t. But great fiction speaks to us in times of need, informing us about the human condition and what it means to be alive. While pulp fiction can often distract us from what we dread, fiction can guide us. Give us hope. Elements of love, hope, and faith rest at the heart of The Princess of Aenya. It may be simple, even cliche, but it is no less important to remind ourselves of the reasons we struggle for life, as the romantic tradition has done for centuries. There is a misconception, I think, that in addressing our deepest sentiments, we make ourselves naive, and childish in our approach to life. Edge-lord-authors may roll their eyes at this rhetoric, but great fiction reflects life as is, and life is a spectrum, neither Snow White nor A Game of Thrones. I don’t shy from the worst aspects of human nature in The Princess of Aenya, I embrace it. But just as my villain, Zaibos, has been compared to history’s worst sadists, Vlad Tepes and Mengele, on the opposite end of the spectrum, there is light, there is Jesus and Buddha and Gandhi. There is Radia.

Where do we go from here?

Sometimes, I suspect life is just a story, our existence born out of some writer’s imagination, and the world is just the setting we are living in. The Big Writer in the Sky, let’s call him, sits at his keyboard trying to make things interesting down here, and since the Trump plot was starting to get boring, he started a new chapter, one about a global pandemic. Unfortunately for this character (me), all my author events are getting canceled. 2020 was going to be my big year, and was off to a promising start with some amazing reviews. 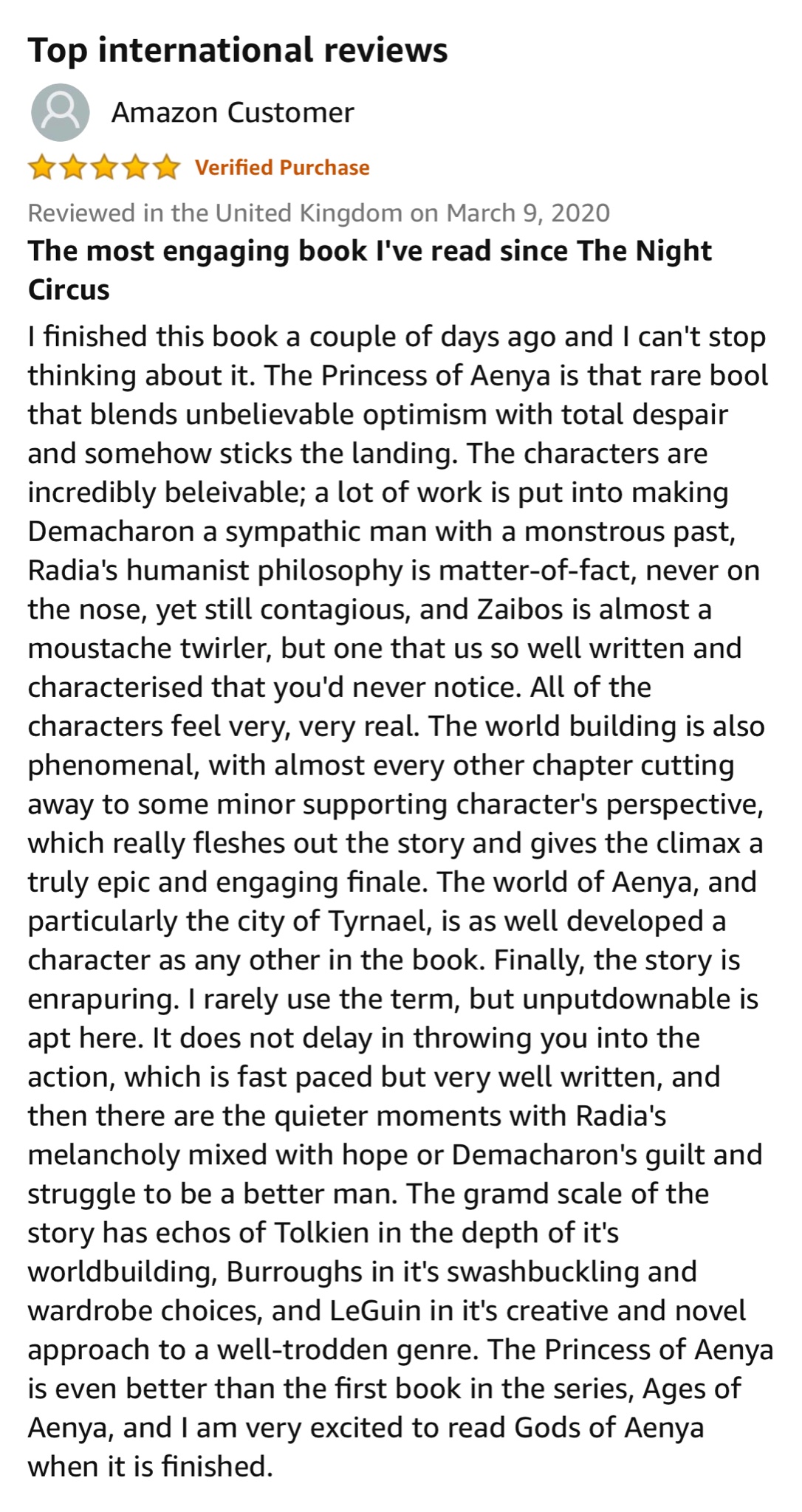 But hey, the best thing to do in quarantine is read and write, so I will be releasing The Princess of Aenya as an e-book earlier than expected. I am also completing a series of artworks that will culminate in my first Princess book trailer. And of course, all that downtime should help facilitate my next big adventure, The Children of Aenya, which will feature Ecthros, who debuted in Princess.

I am not sure if I can legitimately review a book if I haven’t read the whole thing, but after 100 pages, I can say I gave it an honest chance, and give you my input. I’ll call these my unreviews.

Tides of War by Steven Pressfield

As a graduate of ancient history (I dropped out to pursue writing), and as someone of Spartan descent, I was eager to get into Tides of War, but unfortunately, it kept putting me to sleep. Literally.

While Pressfield’s exhaustive research is to be commended, exploring both Greek history and culture, somewhere along the line, I think he forgot to write a story. The worst aspect is in the way Pressfield chose to tell the story, as a narration of a narration of a narration, this bordering on a Spongebob joke (I asked my father about a man who once met another man who once knew this guy who …). The plot jumps all over the place, which may be necessary when you’re writing an (albeit fictionalized) biography, this one encompassing the life of Alcibiades, but a little more focus on a singular event might have kept my attention. As is, I found it difficult to care about anything that was happening when scenes kept changing so rapidly. Ironically, I followed Tides of War with Kurt Vonnegut’s Slaughterhouse Five, a novel known for its loose narrative structure and erratic time jumps (it’s actually the theme) but Vonnegut managed to keep me riveted. I guess it’s all a matter of technique.

The City of Lost Fortunes by Bryan Camp

I recently submitted my book to Kirkus, the most respected reviewer in the business, hoping to receive the coveted Kirkus Star, and, to get a feel for what they deem worthy, I picked up The City of Lost Fortunes by Bryan Camp, his 2018 debut novel.

Now, I don’t like to criticize up and coming writers, because I am overly sensitive when it comes to reviews (it happens) and because Camp is by no means a famous author. So, allow me to preface this unreview by saying that I find Camp to be talented, inventive, and an able wordsmith. That being said, I could not bring myself to read past the 120th page.

The City of Lost Fortunes is an urban fantasy cross between American Gods and The Lightning Thief. But while the story is fairly clever, with many Potteresque moments sprinkled throughout, I simply could not bring myself to care about any of it. Camp’s protagonists are blank slates, existing to move the plot along. We are told something about Hurricane Katrina, and how that event affected the New Orleans community in which the book is set, but how that relates to anything is unclear. And as for the plot . . . again, I could not bring myself to care.

Here it is in a nutshell: two gods, an angel, and a vampire sit at a game of Poker, using Tarot cards instead of a regular deck, and during the game, the God of Fortune is murdered. Who is the God of Fortune and why does he matter? A hundred and twenty pages in, and I still don’t know. The first third of the book revolves around finding the killer, but knowing almost nothing about how gods operate in our world, why and how they play cards, what is the significance of their card game (Camp mentions something about playing with fate, but what that means, I have no idea), or ultimately, why the main character is tasked with finding the killer, I am utterly at a loss. I assume everything is explained by the end, but a good story needs to give you a reason to identify with the protagonist, and then a reason to invest in the plot.

Another thing that bugged me, was the way in which magic is used in The City of Lost Fortunes. Magic is a tricky subject for any writer to dabble in, which is why I avoid it if I can. At first, Camp tells us his hero, Jude, is clairvoyant, able to sense the who, what, and where involving that object. But as the story progresses, Jude’s list of powers grows, to the point where he’s pulling random objects out of a magic bag, controlling people’s minds, and having a car drive itself. When you don’t know what your hero can and can’t do, it robs the story of drama, because almost any conflict can be resolved with some as-of-yet mentioned power.

All that being said, if you’re into well-written urban fantasy, with a lot of interesting ideas, I do recommend giving it a shot. It wasn’t my cup of tea, but it may be yours. And hey, it won a Kirkus Star!